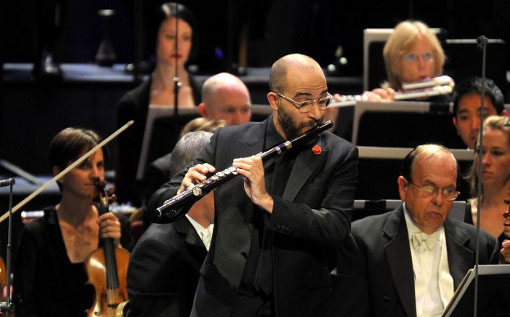 “Above it all the flute line danced, trilled and sang virtually without pause, but soloist Joshua Smith (the orchestra’s principal flautist) handled all this with aplomb.”
– The Telegraph, Ivan Hewitt, 8 September 2014

“Joshua Smith (principal flute) and the orchestra conjured some evocative sounds – from the Syrinx-like mellow opening of the ‘Allemande’, and the airy, ascending phrases of the ‘Sarabande’ as though being wafted aloft on a current of warm air, to the more violent, incisive sonorities of the pizzicato strings and harpsichord in the ‘Courante’, and the monumental brass chords of ‘Choral II’. The greater impression was a sequence of arabesques defined by the virtuosic array of timbres Smith coaxed from his instrument.”
– ClassicalSource.com, Curtis Rogers, 7 September 2014

“Smith’s playing was extraordinarily fine in technical facility and engagement with both orchestra and audience. When required, he would pull off the most daring, virtuosic turns with ease, and in the stiller passages hold the hall in a memorably beautiful moment. It was just as remarkable to see him return to the stage for the second half of the concert. This was a striking performance of a piece which surely deserves wider dissemination.”
– BachTrack, Rohan Shotten, 9 September 2014

“The flute (superbly played by Joshua Smith, who gave the premiere in Cleveland in 2011) is, in the composer’s words, the ‘provider of all impulses’. Here the flute is heard in all its registers from soft (‘dolce’) to ear shatteringly loud and even strident. Welser-Most and The Cleveland Orchestra provided the most involved contouring  of the work’s prismatic unfolding”
– Seen and Heard International, 9 September 2014

“No one could reproach the soloist Joshua Smith or his large, full tone”
– Der Standard, 15 September 2014

“Smith turns out runs, trills, and grace notes like a brilliant, acrobatic musical athlete. The applause for him and Widmann was strong and sustained.”
– APA Konzert/Wien, 15 September 2014

“Widmann’s ‘Flûte en suite’ has a meditative sound at times and then changes into effervescent virtuosity. Joshua Smith deals with both in bravura fashion.”
– Salzberger Nachrichten, 14 September 2014

“Some of the movements were fantastically beautiful, such as the “Allemande”, in which a brilliant, melodious trio of two flutes and bass flute arose. As was the “Sarabande”, with the falling and rising motif of half and whole tones, causing shivers down your spine. In the undulating “Barcarole” Widmann evoked shimmering water and the cadence was mercurially virtuosic, but for Joshua Smith it seemed effortless. He deservedly received a huge round of applause.”
– Het Parool, Erik Voermans, 23 September 2014

“Written for Cleveland’s principal Joshua Smith, a musician with the voluptuous tone and natural stature of a soloist, the piece worked exceptionally well in Amsterdam’s crystal clear acoustics. Widmann’s three movement score is quite fascinating. Chromatic scales, repeated motives, whiffs of both Bach and Pachebel, it would befit an excellent, abstract film. The piece is not so much a dialogue between soloist and orchestra as an obbligato accompaniment to a (voiceless) aria. A stunning performance by both Smith and his orchestral colleagues.”
– BachTrack, Cynthia Wilson, 23 September 2014